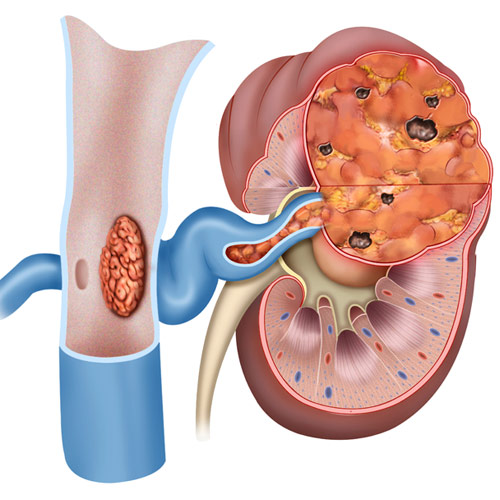 There are several types of malignant kidney tumours that are collectively known as renal cell cancer. In recent years, through the development and use of imaging tests such as ultrasound of the urinary system and CT, the number of diagnoses in early stages has increased, achieving improvements in the survival. In addition, nephron-sparing surgery (or partial nephrectomy) allows removing only the tumour, preserving the organ for the most part and providing a higher quality of life for the patient in the long term.

Our Unit is equipped with specialised personnel and highly experienced surgeons to perform these surgical techniques, which are among the most complex within our speciality. We are also technologically equipped with all the devices available on the market: da Vinci robot, laparoscopy, kidney embolisation, among others.

Kidney tumours represent 2-3% of all adult cancers. It predominates in men in the sixth-seventh decade of life and is clearly related to tobacco use (multiplying up to 2.5 times the risk of kidney tumour in patients who smoke). Other risk factors include obesity, hypertension, end-stage renal failure and having first-degree relatives with kidney cancer. Other possible risk factors have been described (such as exposure to carcinogens, dietary habits, non-steroidal anti-inflammatory drugs, etc.) but with inconclusive data. The best prevention method is to avoid tobacco and obesity.

There are several types of malignant kidney tumours, the most frequent being the clear cell carcinoma (70-80%), the papillary tumour (10-15%) and the chromophobe tumour (3-5%).

More than 50% of kidney tumours are diagnosed incidentally, that is to say, they are found through diagnostic tests carried out for another reason, since they rarely produce symptoms. Symptoms appear due to the tumour growth. The classic symptom triad includes pain, appearance of an abdominal mass and haematuria. Retroperitoneal bleeding or paraneoplastic syndromes may also occur.

Imaging tests are essential for diagnosis.

The percutaneous renal biopsy, guided with ultrasound or CT is necessary in some selected cases: diagnosis of suspicious renal masses in imaging tests, tumours that are not going to be subjected to surgery (monitoring or ablative therapies) or in metastatic tumours in which it is necessary to know their histological lineage to adapt the chemotherapy or immunotherapy treatment.

There are a number of poor prognostic factors that can help us predict the course of the disease: local or distant spreading (metastasis), high nuclear histologic grade (Furhman’s grade), onset of symptoms, anaemia, ESR, high alkaline phosphatase or high LDH.

In the treatment of kidney cancer, a distinction must be made between a localised tumour and the metastatic cancer:

» Nephron-sparing surgery or partial nephrectomy:
Consists in removing the entire kidney tumour, preserving as much of the organ as possible to avoid later renal failure. Achieves rates of 80-100% 5-year disease-free survival. It is the treatment of choice, whenever technically possible, for tumours smaller than 7 cm. It should also be performed in patients with tumours in both kidneys or in patients with only one kidney. This surgery can be performed with an open, laparoscopic or robotic approach, depending on the characteristics of each case.

» Radical nephrectomy:
It consists in removing the entire kidney, respecting the adrenal gland (unless it is infiltrated by the tumour). Lymphadenectomy, or exeresis of the lymph nodes near the kidney, is performed if imaging tests reveal involvement or in cases of poor prognosis. As with the partial nephrectomy, it can be performed with an open, laparoscopic or robotic approach, depending on the characteristics of each case.

» Active monitoring:
Close surveillance of the tumour may be applied on elderly patients who are not suitable for surgery and with tumours smaller than 3 cm.

» Ablative therapies:
Radiofrequency or cryotherapy; application of energy to the tumour (laparoscopically or percutaneously). It can be performed on elderly patients who are not suitable for surgery and with tumours that are smaller than 3 cm.

» Nephrectomy of renal tumour with vena cava thrombosis:
When the tumour progresses locally, thrombus may appear in the renal vein, or even in the vena cava, with a tumour component. In these cases it is necessary to perform the nephrectomy and exeresis of the entire tumour thrombus, sometimes requiring the collaboration of cardiac surgeons. This is a high-risk surgery that must be performed in specialised and experienced centres, being our unit one of them.

» Cytoreductive nephrectomy:
This nephrectomy is performed in cases of metastatic kidney tumour with the intention of curing the patient or prolonging survival, combining surgery with systemic therapies.

» Systemic therapies:
Chemotherapy is of little use in treating renal tumours. However, immunotherapy and drugs aimed at preventing the blockage of the immune system have great benefits for survival.

Urología Tratamiento develops its activity in:

This website uses cookies to improve your experience while you navigate through the website. Out of these, the cookies that are categorized as necessary are stored on your browser as they are essential for the working of basic functionalities of the website. We also use third-party cookies that help us analyze and understand how you use this website. These cookies will be stored in your browser only with your consent. You also have the option to opt-out of these cookies. But opting out of some of these cookies may affect your browsing experience. Check cookies table.
Necesarias Always Enabled
Las cookies necesarias son imprescidibles para navegar por este sitio. Solo se ocupan de funciones básicas de identificación de usuario, seguridad y preferencias de idioma, y no recogen ningún dato personal. Suelen desaparecer ellas solas al cerrar el navegador o tras un tiempo.
No Necesarias
Incluye las cookies de servicios de terceros: Google Analytics, Facebook, Twitter, LinkedIn, Youtube, así como redes de display de anuncios, chats y cualquier otro servicio externo que implementamos en la web. Es obligatorio que ustéd acepte expresamente su uso.
SAVE & ACCEPT